Ertuğrul: how an epic TV series became the 'Muslim Game of Thrones'

August 24, 2020
It has all the hallmarks of a blockbuster, but what has turned this Turkish saga into a global phenomenon is its nuanced portrayal of the Islamic world on a trip to Istanbul two years ago, outside a restaurant a stone’s throw from the Blue Mosque, the waiter arrived. As he leaned forward to pass a menu, the name on his silver badge caught my mother’s eye: “Your name is Turgut?! Like the character in Ertuğrul?” In a split-second, the two had plunged into an impassioned exchange in broken Turkish and English about a hit series of which I had never heard. To my horror, my mother began yelling “Haidar Allah!” and “Ey Vallah” – expressions from the series, I later learned – to the delight of our waiter, who grinned a wide, Cheshire cat smile. The series my mother was referring to was Diriliş: Ertuğrul (Resurrection: Ertugrul). Set in the 13th century, it is a historical drama loosely based on the life of Ertuğrul Ghazi, the father of Sultan Osman, who founded the Ottoman empire.
Post a Comment
Read more

July 19, 2020
Diriliş Ertuğrul ‘Diriliş Ertuğrul’ a historical TV series first aired in 2013, which has taken the Muslim world by storm since then. The series is based on Ertugrul Bey, who was the founding father of Ottoman Empire, Osman I. The series is focused on events leading to the formation of the Ottoman Empire. It is also known for its unique decision to abstain from the use of nudity within the series. It is part of the Islamic faith to be passionate about anything that demonstrates the superiority and dominance of Islam. As such, we understand why Muslims feel empowered by such a TV series. We also understand the need to educate the masses regarding Islamic history, including the rise of the Ottoman Empire. Considering it from this angle, there is some benefit to the series. The main purpose behind the series is to incite patriotism, especially amongst the Turkish nationals, who were its initial intended target audience. The series puts the Turkish people and their values at t
Post a Comment
Read more

FAITH: Who was Ibn Arabi of Ertugrul, who claimed to see “Allah inside the Idols”?

July 19, 2020
The Turkish drama series Ertugrul about the father of Ottoman Empire’s founder Osman I, has taken great audience from especially India and Pakistan into a dark world of deception and heretic beliefs which contradict the fundamental beliefs of Islam. In this article, we’ll talk about who Ibn Arabi was and what were his beliefs, and what did the contemporary scholars of his time and later said about his heretic beliefs. His name was Muhammad ibn ‘Ali ibn Muhammad al-Taa’i al-Andalusi. He was an extremist Sufi. A question that compiles all the beliefs of Ibn Arabi was posed to the author of “Aqeedah Ibn ‘Arabi wa Hayaatuhu by Taqiy al-Deen al-Faasi, which is as follows: Question What do the imaams of the religion and the guides of the Muslims say about a book which has been circulating among the people, the author of which claims that he wrote it and distributed it to people by permission of the Prophet (peace and blessings of Allaah be upon him) which was given to him in a dre
Post a Comment
Read more

All about Dirilis Ertugrul

July 19, 2020
ENTERTAINMENT With everyone under lockdown around the globe, watching television has become one of the most trending pastimes. People have subscribed to Netflix in droves and developed a taste for watching drama serials and movies, which is understandable; there is hardly anything else to do amidst the lockdown. Ertugrul, the new heart-throb of all girls from 13 to 93, is the lead character from the renowned Turkish series Resurrection Ertugrul, comprising five seasons. It has wowed the audiences around the globe, particularly in Asia and the Middle East, and has been praised by Prime Minister Imran Khan himself, who advised the nation to watch this Turkish series. And, Pakistani people have actually fallen in love with it. Ertugrul’s background Ertugrul Ghazi is a historical figure dating back to the 13th century, who belonged to the ‘Kayi tribe’ and fought for his religion, conquering many lands in the way of Allah. He was the son of Suleyman Shah of Oghuz descent. Ertugrul’
Post a Comment
Read more 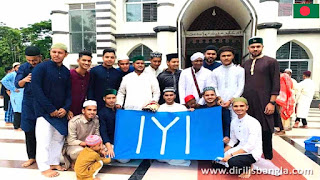 Dirilis Ertugrul is now the name of a World Cup series. It is made from Turkey. But it is now traveling around the world. In this series, a character named  Dirilis Ertugrul , who came up from a group called Kayi, is presented. Ertugrul was the father of Usman Ghazi, the founder of the Ottoman Empire. In addition to this, the history of Ottoman society, Genghis Khan war, Knight and Seljuk society and war is shown in this series. This series has cut across the current world. It has been very popular in Bangladesh for a long time. It has caused quite a stir among many, including today's Pakistan, Yemen, and Kashmir. It has a lot of passionate viewers in Bangladesh who love this series and are creating and using different materials used in this series. Materials such as hats, t-shirts, rings and other items are visible among the permanent settlers of this series. In addition to different materials, many people have gathered in different places. But this time we saw anot
Post a Comment
Location: Dhaka, Bangladesh
Read more